We are approaching the one-year mark of Anne-Marie's death. (I hate using the word "anniversary" in the context of tragedy. I think it should be reserved for happy occasions.) As we move through these last few days before the day, I wanted to post some loose thoughts that needed to land here on the blog, but hadn't found their place as of yet.

Anne-Marie had everything she needed all on her own. She had a good family, was artistically talented, got good grades. She didn't need me.

Part of the reason I write these things is because I believe that over these last several years, I've gotten credit for all kinds of things that had so little to do with me. Anne-Marie was strong. She placed herself in positions to be successful in life before I was there to share it with her. (And I hope I'm not misunderstood. I've found that sometimes a subject like this can be communicated in a way that makes the opposite point of what was intended.)

People for years talked about us as "high school sweethearts". Mostly true, but what people either forget or don't know is that we broke up after high school for a good amount of time. Why? Because, going into my 20s, I had stuff I needed to figure out inside myself. It was the ultimate "it's not you, it's me" because it was indeed 100% me.

By the time we were both headed toward college, we were headed back toward each other, but she would have gone to college regardless of whether I'd shown up again. She did well in college and went on to a career as a dental assistant. It was an extremely challenging environment. Anne-Marie had stories of things she went through in those first few years that--as her new husband listening to them at the dinner table--were as much as I could take. I was ready to drive to the office and bust some people up.

I didn't do that because I didn't have to. Anne-Marie could handle her own business and she did. Eventually, things got better and she grew in that position. She became the lead assistant until 2006 when she was diagnosed with cancer.

She beat back cancer and a year later she was back in her position at the dental office. Her whole upper body had been re-built through a couple of surgeries and she was experiencing pain that would never leave her because of it. Work just amplified it.

She loved that job and only left in 2009 because she wanted to care for her two newly-adopted children. How do I know she loved it? Because by 2015, after eight more surgeries and two more reconstructions, she was considering going back to work in a dental office during the hours the kids were in school.

The year 2016 trampled those plans when the doctors told Anne-Marie that her cancer had returned and would remain until it took her life. That was the year they officially qualified her as "disabled", though the government told us the label should have been applied four years earlier. Of course, she wasn't about make that phone call back in 2012.

Of course, all kinds of treatments and procedures came along with 2016 and Anne-Marie lost some of those artistic skills she had when I first met her. Her singing voice went away with the treatments. Surgeries had taken her ability to play the piano--which she did so beautifully for 30 years--without intense pain. But "disability" isn't near as disabling as it sounds sometimes.

In 2017 we decided to buy a house and along with that, Anne-Marie elected to homeschool our daughter. This was a new benchmark of crazy for her. As hard as it was, it only ended by being ripped from her grasp in early 2018 when her oncologist told her the next surgery was for a tumor in her brain and would require months of recovery.

I think it took those 16-1/2 years of being married for her to really need me to get by on a daily basis. She'd taken cancer to the mat three times and won all three. Up to that point in 2018, she would even tell me how there was only one tumor left (it was a huge one in her lung) that she was just waiting for God to take away and finish the work He'd already started.

For sure, there were times I pushed her to give it one more try, but others I would look at her like she was out of her mind. The last few years of her life was probably a bit more of the latter.

I still see it today sometimes in the hearts of her children and I'm reminded that strength like than can never remain isolated as a thing of observation alone. It's transferable. Her strength became theirs. Became ours, really. I count it as the most special gift. 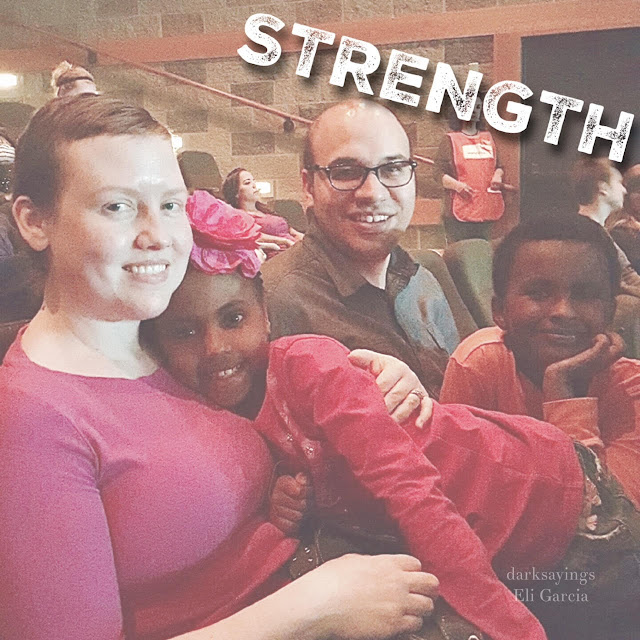